You have no items in your basket

View Shopping Cart Checkout
This websites use cookies. By continuing to browse the site you are agreeing to our use of cookies.
Accept More information
My Cart (0)
My Cart (0)

Ethanol is a hydrophilic compound, it’s hydroscopic, which means it naturally attracts water. Therefore, when water enters a tank containing an ethanol blended fuel, (either via natural means or through contamination/intrusion), the water will eventually be absorbed by the 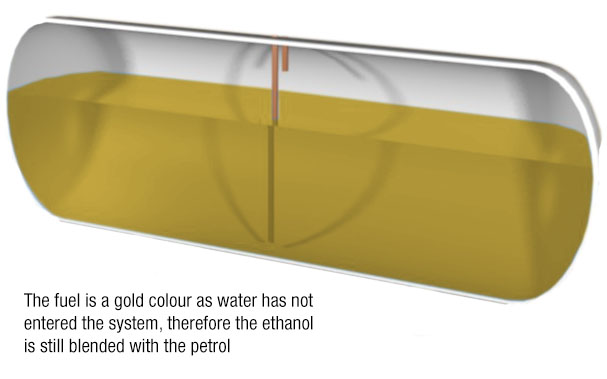 ethanol. Once critical mass is reached Phase Separation can occur.
How Phase Separation forms
Water in the tank will continue to be absorbed into the ethanol-blended fuel until it reaches a saturation point. With E-10 fuel at 15°C, this saturation point is at approximately 0.5% water to the volume of fuel. Once the
blended fuel reaches this saturation level, the ethanol-water mixture separates from the fuel and falls to the bottom, since its density is now higher than the fuel with which it is mixed. This separated layer is commonly known as Phase Separation. The phase separation layer typically contains 3-4 parts of ethanol for each part water. An alternate phenomenon can occur with far less water than that needed for phase separation. 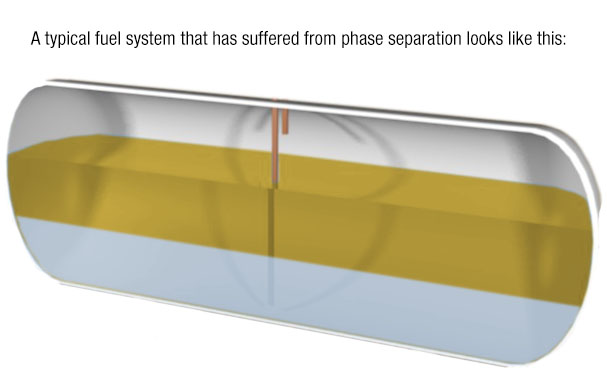 As previously discussed, some of the water will drop directly to the bottom of the tank as it enters. This water will pull some ethanol from the fuel as it passes through it. This water-ethanol mixture will then pull additional ethanol from the surrounding fuel over time, increasing in volume and resulting in a mixture that is very similar to phase separation; this layer is referred to as Partial Phase Separation. Partial phase separation can occur with far less than 0.5% water. The resulting layer may contain less ethanol than normal phase separation, making it more dense.
What are the possible effects of Phase Separation?
Phase separation contains a lot of ethanol, some water, and a small amount of petrol, a typical ratio would be somewhere around 75% ethanol, 20% water, and 5% petrol. This mixture is highly corrosive when compared to pure water or E-10 petrol; there are some concerns that phase separation may even be more corrosive than 100% ethanol. Some tanks may not be compatible with this ethanol-rich, corrosive liquid. Depending on the composition of the tank, phase separation sitting in the tank may slowly deteriorate the integrity of tank walls, increasing the risk of a leak into the environment; glass fibre tanks on motorcycles, etc. are partially susceptible
to this mix.
Beyond the tank, other elements of the storage and fuel
system (piping, carburettor, gaskets and diaphragms) may also be at risk where this phase separation mixture comes in contact, resulting in potential deterioration and/or irreparable damage to components.
Failure to recognise, treat and take steps to prevent phase separation
can lead to poor running machinery, mechanical failures/damage, which in turn can result in a expensive repair.

What is ethanol and why is it now in my fuel?
Basically - Ethanol is a renewable, domestically produced alcohol fuel made from plant material, such as corn, sugar cane, or grasses. Using ethanol can reduce oil dependence and greenhouse gas (GHG) emissions.
Ethanol causes fuel decay
Ethanol is organic, therefore it naturally contains oxygen. The high levels of oxygen contained within ethanol blended fuels cause them to decay faster, and if left standing for long periods of time, the decaying fuel will leave varnish and sludge deposits as depicted in these carburettor images.

Think of it this way -  Petrol is now a bit like milk,  both are organic - they decompose the same way. A foul, sour smell indicates STALE FUEL! Power equipment not treated with an ethanol fuel stabiliser will become hard to start within 30 days. Petrol can decay in as little as 60 days!

Test
It’s very important to understand the quality of the fuel that you put into your valuable equipment. Whether it be petrol or diesel, the majority of engine problems are due to bad fuel. Our fuel quality test swabs let you know if your ethanol blended fuel is fresh, marginal (decaying) or bad. Knowing your fuel quality is the first step to fixing and preventing your fuel related issues.
Why test your petrol?
Ethanol attracts water; settles on the tank bottom (phase separation) and is pulled in by the fuel line.
Ethanol blended fuels can decompose in as little as 60 days.
Severe engine damage can occur when run on marginal fuel.
Damage can include carbon, varnish, rust, gumming, brittle and broken rubber and plastic parts, corrosion and much more.
Why test your diesel?
Over time, water can accumulate causing bacterial growth, yeast, mould and diesel bugs.
These appear as sludge coating the bottom and sides of the fuel tank. In extreme cases, bacterial growth that look like strands of hair begin to accumulate.
The resulting problems include sludge, rust, asphaltenes, plugged filters, dirty injectors, reduced MPG and more.